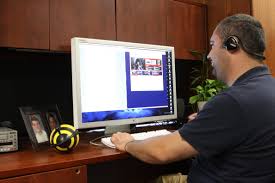 Louisville, Ky. (September 24, 2019) – The number of people working-at-home regularly has grown 159 percent since 2005. That’s eleven times faster than the rest of the workforce.

Some other staggering numbers: 40 percent more US employers offered flexible workplace options than they did five years ago; 4.7 million employees (3.4 percent of the workforce) now work from home at least half the time; and 80 to 90 percent of the US workforce would like to join them—at least two to three times a week.

This data, released just last month, comes from Global Workplace Analytics. According to the company’s website, the numbers are based on an “analysis of 2005-2017 American Community Survey (US Census Bureau) data.”

“These numbers are substantial but not surprising,” said Chris Pedersen, VP of Development and Planning, Connected Nation. “Back in 2013, our staff noticed that there was a need for more digital training to help people fill jobs that could be done online from anywhere. That’s when we started Digital Works. Since then, we’ve seen tremendous growth in the number of people looking for flexible jobs that allow them to work from home and around their busy schedules or personal situations.”

Approximately 40 percent of the workforce works remotely at some frequency, and half the US workforce (right at 50 percent) holds a job that’s compatible with at least partial telework.

Global Workplace Analytics points out that multiple studies show desks are vacant 50-60 percent of the time. Fortune 1000 companies around the world are responding to this trend by “revamping their space around the fact that employees are already mobile.” 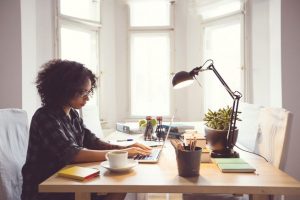 The group found that the typical telecommuter is college-educated, 45 years or older and earns $58,000 a year while working for a company with more than 100 employees. In addition, 75 percent of employees who work from home earn more than $65,000 a year, putting them in the upper 80th percentile of all employees, home or office based.

“Digital Works graduates generally start at an entry level and then can work their way up,” said Pedersen. “But the potential for growth financially and professionally is huge when it comes to teleworking. Not only are we seeing people who want these types of jobs but more companies are looking for qualified workers to fill remote positions—this includes big companies such as Google, Amazon, and others.”

That’s probably because it’s not only keeping employees happy but it’s also good for the bottom line. According to the data if those with compatible jobs and a desire to work-from-home telecommunted even just half the time, the national savings would be more than $700 billion a year. Those numbers include:

You can read more about the study by heading to the Global Workplace Analytics website. Click here to learn more about Digital Works or visit www.digitalworksjobs.org.