RTA interim CEO Dr. Floun’say Caver announced the Wi-Fi services with East Cleveland Mayor Brandon King during a Tuesday news conference at the Louis Stokes/Windermere station, where Wi-Fi is available in the lobby and along the rail platform and bus loop.

The other stations and transit centers already equipped with Wi-Fi access are: 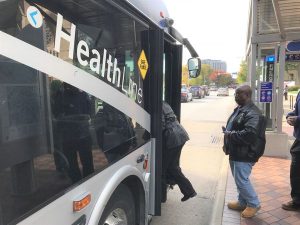 · Cedar University Station, in the interior bus waiting area and rail lobby (Access in the outdoor bus area and the rail platforms to be added soon.)

· East 55th Station, in the lobby and outdoor platforms

Wi-Fi is scheduled to be added in September to trolleys and buses on the CSU Line, HealthLine, and east side Hayden District. Paratransit vehicles and buses in the west side Triskett district will receive access later this fall.

Internet services for stations, buses and trains are part of a $2 million, five-year AT&T contract approved in June by the RTA board of trustees. The contract also brings 4G cellular data to all RTA vehicles which will be used to power real-time location services, vehicle diagnostics and other technological improvements.