The Governor’s Office in a Tuesday, May 28, news release announced the first round of awards in Noem’s Connect South Dakota program. Th 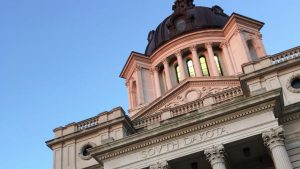 According to the news release, this spring’s awards will benefit an estimated 100 businesses and 4,800 residents, and are expected to be completed by the end of 2019.

Expanding rural broadband has been a talking point of Noem’s since she took office in January, and she first proposed the $5 million program during her January budget address. The allocation was approved by legislators during the 2019 session.

In Tuesday’s release, Noem called the program “a step toward closing the broadband gap in South Dakota and equipping our kids for the jobs of the future.”

“Raising the next generation with access to online resources is our responsibility as parents and citizens,” she said.

All but one of the eight awarded projects are for communities located in the eastern half of the state. In an emailed response, Marketing and Public Relations Director for the Governor’s Office of Economic Development Mary Lehecka Nelson said the single West River awardee was the only applicant from the western region.

“The entire telecommunications industry in SD was invited to participate, regardless of geographic serving area,” Lehecka Nelson wrote.

She said there was a total of 10 applications received, eight of which were approved. A group of government, technology and grant experts reviewed the applications based on the rurality of the project areas, performance of the project, companies’ ability to exceed the grant matching requirements and whether farms, businesses, “critical community facilities” or reservation lands would be served.