TIFTON — Georgia farmers have technological advancements at their fingertips, but many are not able to use them to their fullest extent due to the lack of broadband internet access, according to Wes Porter, University of Georgia Cooperative Extension precision agriculture and irrigation specialist.

“We’re creating all sorts of useful data on machines in the field, but if we don’t have a reliable way to get it off the machines, processed and back into the farmers’ 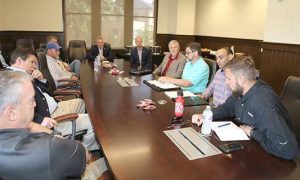 hands, it’s not going to be utilized,” Porter said.

“The important thing is that the FCC commissioner got to hear firsthand from the people who need this technology to produce sustainable crops,” Scott said. “However, it’s not just for them, but it’s important to ensure prosperity for the rural economy. If the farmers are doing well, the whole rural economy’s going to do well.”

Porter and UGA agricultural engineer Glen Rains said tools such as auto-steer technology, variable rate irrigation, in-field controllers, smartphone apps, soil moisture sensors and unmanned aerial vehicles are all critical precision agriculture tools they use in their research for the UGA College of Agricultural and Environmental Sciences. These technologies help UGA scientists be more efficient in the field, but many of the state’s producers are restricted by the lack of broadband access or poor-quality broadband service.

“We’re sitting on the cusp of all of this new and innovative technology. Most of our farmers have this technology, but it’s underutilized for that one reason,” Porter said.