Head to the original posting to hear the audio.

Vivian Livingood is the mayor of Gilbert, a southern West Virginia  town of under 500 people that has struggled for years without reliable internet. Livingood said that hampers Gilbert’s tourism, businesses and schools. 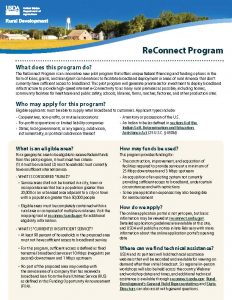 “We get kicked off the internet here every two minutes, and that’s if we can afford the internet,” Livingood said. “And it’s just pitiful service. It’s not fast.”

The program, started in 2018, allows companies, nonprofits, and communities in under-served regions to apply for loans and grants to fund broadband projects. The recent federal budget deal signed by President Trump on February 15 added $550 million more to the program, for a total of over $1 billion available.

To qualify for these funds, 90 percent of households in a community must “lack sufficient broadband access.”

USDA Rural Development Kentucky State Director Hilda Legg said the program is a first for the agency in that some funding is available through grants alone. That can make broadband more affordable for communities like Gilbert. But Legg said Ohio Valley communities that apply will still have to compete with others across the country.

“It requires local leadership to be committed to it to support segments of the private sector that may want to help them come in and help them put a plan together or an application together,” Legg said.

The ReConnect program also is happening alongside other federal and state broadband efforts. For example, the Appalachian Regional Commission recently announced two grants in the Ohio Valley to study broadband needs.

Another initiative is Kentucky Wired, a state program to build a broadband network throughout the state.

Kentucky Communications Network Authority Executive Director Phillip Brown, who oversees the program, said because the two programs are separate, ReConnect applicants could also use Kentucky Wired’s network. But they don’t have to.

“There’s no requirement that an applicant for any of the subsidy programs use our network. They’re going to find the [network] that works for them,” Brown said.

Brown said while he hopes ReConnect applicants will work with Kentucky Wired, he understands communities are going to find broadband solutions that work best for them.

An examination last year by the state auditor found Kentucky Wired to be more than $100 million over budget with multiple delays in its construction.