Published by StateScoop on December 4, 2018
by Ryan Johnston

Microsoft will expand its rural broadband development initiative to reach three million people throughout 25 states by July 4, 2022, according to an announcement made by company President Brad Smith on Tuesday. 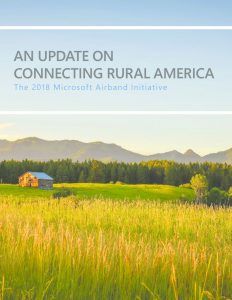 Click the above to read Microsoft’s 2018 update on the Airband Initiative. Connected Nation contributed to this report (see pg 9).

The company launched its “Airband” initiative 18 months ago to partner with local and regional internet service providers across 16 states with the goal of expanding broadband access across rural America. The initiative is mostly based on Microsoft’s use of TV white space — unclaimed television spectrum, common in rural areas, that has broadband potential.

By partnering with local ISPs in unconnected areas and using other technologies, like satellite, 4G, and fiber, the software giant is hoping to tailor broadband efforts to regions that need access. Last month, the company announced a partnership with Native Network, a telecommunications company that works with tribal groups in the Midwest, to bring broadband to more than 70,000 citizens in Montana and Washington.

That partnership was facilitated through a hybrid fiber/wireless broadband network, but Smith emphasized in a blog post on Monday his belief that TV white space is a cheaper and equally effective alternative for the government to invest in. Smith claims that 90 percent of the the federal government’s broadband development spending to date has been on wired fiber connectivity — fiber certainly dominates broadband infrastructure spending — that costs three times as much as wireless technology, such as TV white space devices.

“If the federal government reallocates just a small additional fraction of public money toward incentives for TV white spaces devices, it will help accelerate adoption, bring costs of devices down and help the ecosystem lift off. None of this funding would go from the government to Microsoft, but it would be available to the telecommunications partners whom we are working to assist,” Smith writes.

Four states — Arizona, North Dakota, Texas and Kansas — are in a pilot stage for the Airband initiative, and will be onboarded through a mix of technologies and various partnerships with local telecommunications companies. The other five — California, Indiana, Mississippi, Oklahoma and West Virginia — will see local initiatives begin to form over the next year. The company, which had an initial goal to reach two million people with broadband by 2022, has already reached one million, Smith said. After helping enable broadband access, Microsoft, which has pledged to reinvest all revenue from the Airband initiative into further outreach efforts, will provide skills training in rural communities, as well as continue to build its curriculum partnership with the Future Farmers of America.

The original article can be found here.