by Katherine Knott, The News-Enterprise 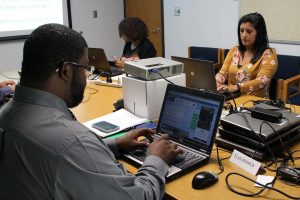 Norvinnia McLaurine (left) practices for a typing test. The U.S. Army veteran is taking part in the first Digital Works class aimed at military spouses and veterans. Digital Works is a job training program which also connected graduates to jobs.

Elizabethtown, Ky. (September 4, 2018) – Norvinnia McLaurine left the U.S. Army after 21 years of service in April. Since then, he’s struggled to find work.

McLaurine, who was a warrant officer, said he found it difficult to translate his military skills to the civilian workforce. He’s also raising his 19-year-old son who has autism, so he needs a flexible work schedule.

“I want to care for him and be an asset to the community,” he said.

McLaurine is one of four students participating in Digital Works, a new job training program geared toward veterans and military spouses. The four- to six-week program equips students with skills to work in the telework industry and connects graduates to customer support and IT jobs for global corporations.

McLaurine said the class, which started two weeks ago, has been excellent so far.

“It takes out the stress of having to find a job,” he said.

Digital Works is a program of Connected Nation, a technology nonprofit, and is offered free to veterans and military spouses.

Connected Nation recently launched Digital Works at Eliza­beth­town Community and Tech­ni­cal College. The college is the only location for the training program, which exists in six other states, in Kentucky.

Connected Nation representatives, along with local and state leaders, gathered Tuesday at the college to celebrate launching the program.

“It’s taken more than a year of hard work and determination to bring us to this point,” Connected Nation CEO Tom Ferree said.

Read the full story on the News-Enterprise.