(February 20, 2018) – Connected Nation (CN) staff was invited to testify on Tuesday, February 20, in two states—Nebraska and Ohio. The two hearings focused on several pieces of legislation that would seek to expand broadband access to more people in each state. However, the bills under consideration each approach the issue in different ways. 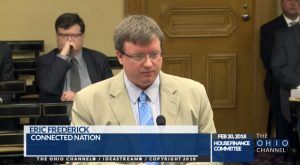 “House Bill 378 will allow Ohio to join other states on the path to ubiquitous broadband by not only providing grants for broadband expansion, but by also funding efforts to understand where the unserved areas truly are and are not,” Frederick told the committee members.

Connected Nation has worked in more than 30 states, including Ohio, providing broadband mapping and planning projects. The nonprofit has a long history at the grassroots level in more than 600 communities through initiatives like the Connected Community Engagement Program (ConnectedSM), in which CN helps local leaders build comprehensive technology action plans for their communities.

Frederick has filled the role as director of the ConnectedSM program for several years and explained to Ohio lawmakers why CN believes HB378 is good for the state.

“This legislation is smart, good government—by including granular, validated broadband mapping, the broadband grant dollars indicated in this legislation will be meaningfully and purposefully spent in order to deploy access to the thousands of Ohioans who truly need it,” he said. 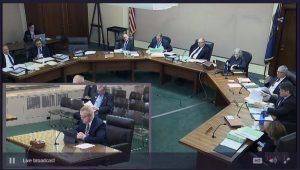 Later that day and about 900 miles away, Brent Legg, Connected Nation’s Vice President for Government Affairs (pictured right, lower left corner of image), was testifying before the Nebraska Legislature’s Transportation and Telecommunications Committee.

“Reliable broadband mapping is a matter of critical importance to residents, businesses, and community anchor institutions in areas where robust broadband is lacking, as any good map should give voice to those who find themselves on the other side of the Digital Divide by prioritizing the closing of those gaps,” Legg told the committee members.

Legg explained why Connected Nation supports Legislative Bill 1114, which provides for the creation and maintenance of a state geographic information system map under the Nebraska Telecommunications Regulation Act.

“The FCC will soon roll out an updated National Broadband Map using 477 data. Unfortunately, this data isn’t sufficiently granular to adequately inform policymaking or decision making at the state or federal level,” he said. “Form 477 requires providers to report Census blocks where they provide service . . . if even one household in a given block is served, the entire block is considered as having service, resulting in a significant overstatement of availability.”

“That’s why states cannot rely on federal Census block data on service availability,” Legg said. “Until Congress fixes this issue, the state should enact LB1114 to collect GIS data at the street address or land parcel level of detail.”

About Eric Frederick: Eric is the Vice President of Community Affairs for Connected Nation and Executive Director of Connect Michigan, a subsidiary of CN. He’s responsible for managing the development and implementation of Connected Nation’s Connected Community Engagement Program (ConnectedSM). He also develops and maintains partner relationships and provides primary management, oversight, and support for Connect Michigan’s state broadband strategies. Email him at efrederick@connectednation.hatfield.marketing.

About Brent Legg: Brent is the Vice President of Government Affairs for Connected Nation. He leads Connected Nation’s public policy team in the development of strategies for increased government support of broadband connectivity. He manages education-focused services, including strategies that help states and school districts maximize the impact of the federal E-rate program on school connectivity. Email him at blegg@connectednation.hatfield.marketing.